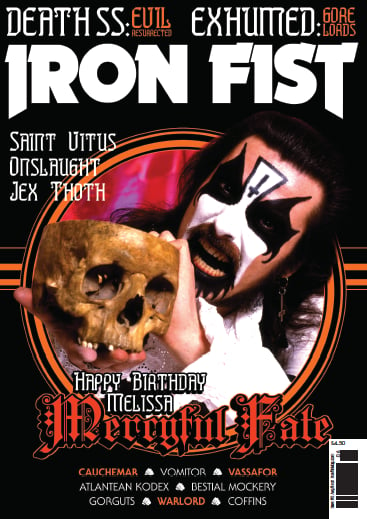 It was so good to have KING DIAMOND back on British soil this weekend… and it’s good to have the King on the cover of Iron Fist issue 6. When we started this magazine a year ago (yep, we can’t believe it either!) it was always our dream interview and with the 30th anniversary of ‘Melissa’ coming up (we can’t believe that either!) Damien spoke to the man himself about his whole career, from Brainstorm to Bloodstock… he even hinted at a possible Fate reunion… we live in hope!

Putting issue 6 together was carnage, we must admit. It’s festival season, which means that most of our team were lying face down in a field somewhere in Europe rather than tethered to our keyboards, but we managed it – despite insane hangovers from Muskelrock, Metallsvenskan, Bang Your Head or Hell’s Pleasure.

This time last year, when we were just brainstorming our first issue, we never expected to make it to issue 6 and we want to thank you for all the support over the past 12 months and don’t want to ever stop. As we start to work on issue 7, our first year anniversary issue, we want to dedicate this one to you, our readers, who have given us the encouragement and ass-kicking needed to keep demonstrating the IRON FIST!!!