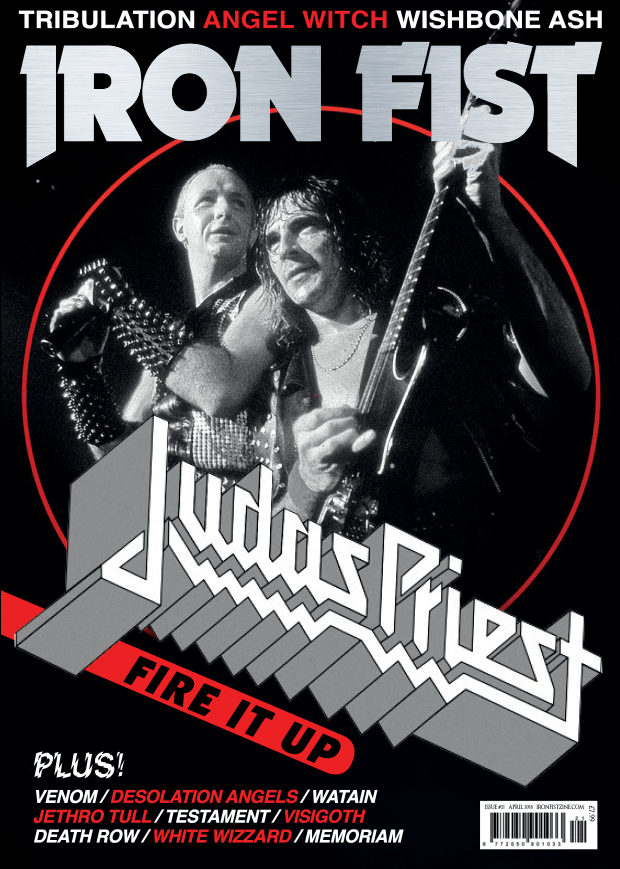 Strange as it may sound to some, at Iron Fist we don’t consider ourselves a retro magazine, exactly as we don’t consider Heavy Metal a thing of the past, more a timeless force. Therefore it’s something of a delight to unveil a new issue - a staggering thirty-six pages fuller and printed on a much heavier, more tactile paper-stock - that does more than ever before to unite past, present and future into one everlasting continuum of steel.

Who better then for the cover, indeed, than modern Metal’s most towering progenitors, the mighty Judas Priest. Currently traversing the globe on a tour that takes them across the States, to Bloodstock and beyond, this titanic troupe’s storied career is covered in depth in a chat between Dom Lawson and Rob Halford, from the 40th Anniversary of Sin After Sin to the ripping new album Firepower, and all points in between on the eternal heavy metal highway.

We’ll also be taking you all the way back to the big bang, courtesy of an illustrious new addition to our writing team. Electric Wizard’s Jus Oborn waxes lyrical here in passionate fashion, and in the first of a regular series on his essential touchstone rackets past and present, on Blue Cheer’s Vincebus Eruptum - a garage-birthed mutant recently fifty years young and of such supernatural proportions that many reckon it the first ever Metal record.

Moreover, we’ll be dealing with another legendary institution in the mighty and mystical Jethro Tull, whose Ian Anderson discusses a half century of unclassifiable magick and his near-one-man mission to elevate the flute to heavy rock glory. Wishbone Ash, meanwhile, have been essentially responsible for the twin-guitar-harmony fervour that underpins the classic metal metier, and we not only interview the band’s main protagonists but are delighted to have James Sherry, son of their former manager John writing a memoir on his days hanging out with Martin Turner at the age of ten, not to mention exactly what happened to the guitar on the cover of ‘Just Testing’.

As if all this wasn’t enough already, another new regular feature sees us offering a 16-page zine report and meeting chroniclers of the underground past and present, with photos and original typewriter and Xerox print galore - who better to kick this off than Brian Slagel, the man who signed Slayer and he who once sparked up a conversation with Lars Ulrich over a Saxon T-shirt. Elsewhere, we’re glad to welcome another Californian legend, and arguably the world’s most devoted and passionate metal maniac, Hirax’s Katon W. De Pena, to talk us through his vinyl glories old and new.

All things considered, and when the dust’s settled from this almighty firestorm of heavily amplified majesty spanning generations and worlds alike, we strongly suspect we may have amassed more heavy metal than you can handle this time around. Fancy proving us wrong?