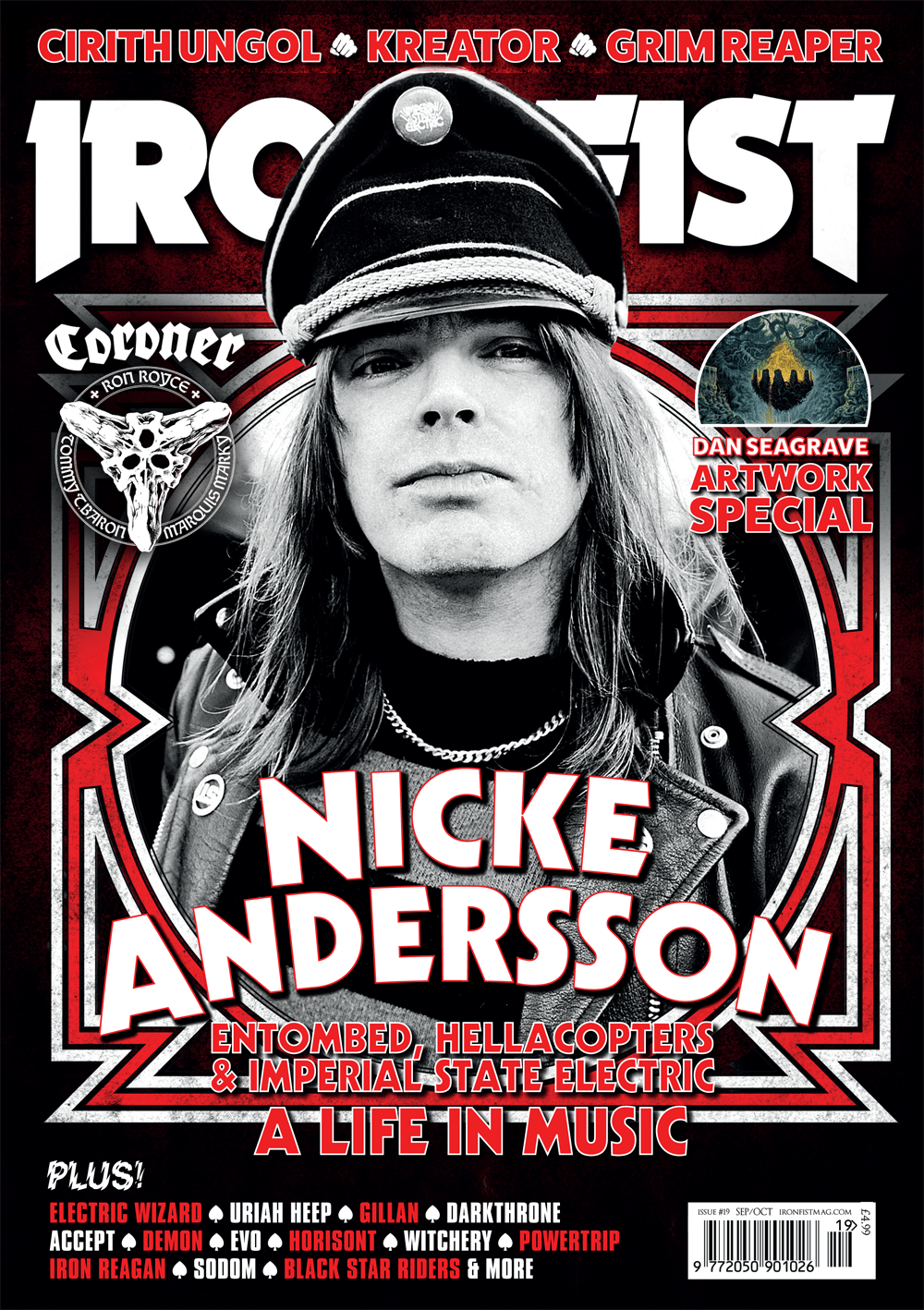 Heavy metal will never die and because of this - neither will IRON FIST!
From the depths of hellfire and brimstone, Iron Fist 19 is finally out  - only print is real and only Iron Fist can give you the best in all things classic, and new, heavy metal thunder!

This issue's cover star is one of Sweden's most prolific and long-standing characters, Nicke Andersson.
We discuss all aspects of Nicke's career, leaving no stone unturned. From his early memories of what kickstarted his love of music, Nicke talks frankly about the revitalised Entombed and just why he felt he needed to go back to his death metal roots; the Hellacopters; and of course his latest band Imperial State Electric.

To coincide, we also have a killer chat with celebrated artist Dan Seagrave about his own career as one of metal's most renowned and distinguished artists. Dan of course worked on Entombed's 'Clandestine' masterpiece and has also reworked the artwork for the year 2017. See both of these pieces in their full glory inside Iron Fist - side by side, just as Dan himself requested, to enjoy the visual experience even more.

Our interview with Steve 'Grim Reaper' Grimmett was conducted just before a truly horrific leg amputation while on tour, but we are pleased to hear Steve is making a good recovery and rehabilitating himself. Be sure to also check out Steve's recently released solo albums and, if you're in London, make sure you head down to the Underworld in Camden later this month where Grim Reaper are headlining a killer show of NWOBHM mayhem.

Mille Petrozza - Kreator's highly driven frontman - reminiscences about the band's breakthrough album 'Pleasure To Kill' which, in 2017, celebrates its 30th anniversary. Esteemed Iron Fist scribe Kevin Stewart-Panko talks to Mille about the creation of the album and discusses why, even today, it is viewed as one of the landmarks of thrash metal.

Elsewhere, Carcass' Bill Steer talks us through his mighty vinyl collection and the joys of browsing and purchasing at charity shops; Uriah Heap's Mick Box talks to J. Bennett about the making of their classic debut 'Very 'Eavy... Very 'Umble'; and we celebrate the legacy of classic UK label Music For Nations with a retrospective discussion about the label's impact on the metal scene, featuring a chin wag with some of the artists from the classic roster.

All this is topped off with conversations with Iron Reagan, Power Trip, Witchery and much more.
Iron Fist is, as always, all killer and no filler!